As soon as you thought it couldn’t get any better. We hit you with our Apple Strudel Bread Pudding. YUM!

Is bread pudding a breakfast or dessert?

It’s both! This warm, delectable Apple Strudel Bread Pudding can be served as either. Breakfast walks a fine line with dessert anyway. Among those “dessert for breakfast” items are: pancakes (a flat cake doused in liquid sugar), french toast (dunked in a vanilla custard and fried, I mean come on now), muffins (yes muffins. It’s an unfrosted cupcake), pastries (obviously), just to name a few. Yes, you’re eating dessert for breakfast and without any hesitation we say, “Yes please!” to that.

Is this your first time making bread pudding?

You might be asking what type of bread can be used. The answer is nearly any type of bread. That is the great part! White breads tend to taste a bit better they are not as dense as wheat bread. The most common breads used in bread pudding are French Bread or Brioche.

Historically, bread pudding is made with left over bread which has gone stale along with eggs and milk. You will find many bread pudding recipes still utilizing stale bread today. Which will require you to leave your bread out overnight. However, here at Salt Cellar & Sugar Pot we prefer to make our bread pudding with fresh bread. We don’t feel stale bread is key to making a delicious bread budding (although it has it’s purpose in a recipe). So…if you don’t have stale bread laying around or you just prefer the taste of fresh bread (like we do), you don’t have to use day old bread.

Deciding to use an Apple Strudel bread was all in all a great idea. It added a touch of sweetness and texture to the bread pudding along with a streusel baked on top. It turned out amazing! In addition, we also topped our Apple Strudel Bread Pudding with a warm Apple & Craisin compote. We especially enjoyed having this on hand as a warm sweet treat during the massive snowstorm we had this week.

Apple Strudel Bread Pudding makes a great dessert as well and will keep for a couple days. It pairs well with a scoop of vanilla ice cream. Delish! 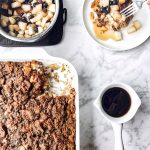 In a larger bowl whisk together, eggs, half n half, cinnamon, all spice, maple syrup, vanilla extract, and brown sugar. Pour over bread and cheese in 9x13 pan. Cover and refrigerate over night.

The next morning preheat over to 350"F

In a medium mixing bowl combine brown sugar, cinnamon, flour and butter.  Mix by hand to create a crumble.

Remove bread pudding from refrigerator. Sprinkle streusel over your bread pudding in 9x13 pan.  Do not cover, place pan in oven to bake for 1 hour. If bread pudding is getting too brown on top place foil over pan to prevent further browning.

Serve the compote over the bread pudding and/or serve with vanilla ice cream.

Blueberry Pancakes With A Twist

... welcome to our blog "Salt Cellar & Sugar Pot". We are sisters who enjoy cooking, baking, photography, and design. If you by chance find your mouth watering as you browse through, please try not to lick your screen. We may have made that mistake once or twice ...

This website uses cookies to improve your experience. We'll assume you're ok with this, but you can opt-out if you wish. Accept Read More